- December 08, 2017
December is upon us, and the festivities are well underway! The trees are lit, markets are open, and snowfall has begun. While students are finishing up essays and exams, they are also trying to fit in the last few days of winter exploration.

Side note: If you plan on journeying to an Italian-speaking destination during the holidays, you should know the word for Christmas – “Natale” – as it will pop up everywhere.

It all began on December 1st with a series of tree lightings in Lugano. First, Franklin students decorated the FUS Christmas tree on campus with lights, decorations, and – of course – tinsel. There were cookies, candy canes, hot chocolate, and smiles so big that they could only be caused by holiday cheer. After the tree was sufficiently shiny, students wandered downtown to watch the city’s biggest Christmas tree light up in the main square (the Piazza della Riforma). After the long-awaited countdown, the packed crowd dispersed to explore the Christmas markets and warm up with hot drinks. 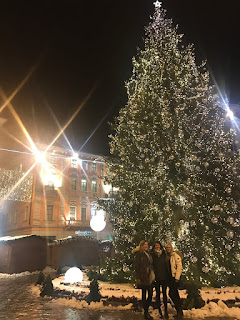 After the festivities began, my friends and I used our “After 7” train passes (see the previous blogpost about transportation) and hopped on a train to Fribourg, a bilingual French/German speaking city in the Western part of Switzerland. During our visit, we traipsed through the snow and attended the city’s largest festival – The St. Nicholas Day Parade. Thousands of excited viewers gathered to watch a teenage boy dressed up as St Nicholas give his annual speech from the top of the city’s 500-year-old Cathedral of St. Nicholas. 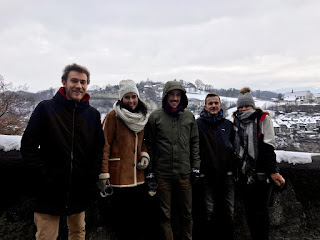 The holiday spirit continued on December 3rd, when Franklin students ventured to the renowned Basel Christmas Market. Every year a group of resident assistants plan a trip to Basel, a German-speaking Swiss city that is just three hours away from Lugano by train. Basel is known far and wide for being the most festive Swiss city during the Holidays. Not only is the Christmas Market the largest in Switzerland, but the streets are lined with incredible lights, and the museums and galleries are occupied with special exhibitions. The group had the chance to buy gifts for friends and family, drink hot wine, eat traditional Swiss food (including baguettes filled with melted cheese), and enjoy each other’s company during this magical time of year. 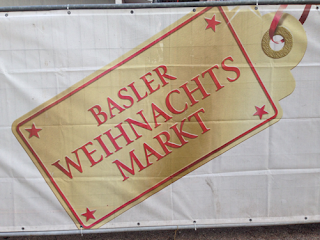 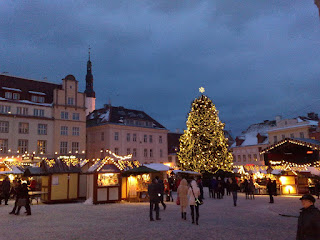 On the 10th day of December, Franklin students were gifted with the first snowfall of the season. On Monday morning, the first official day of Final’s week, the inhabitants of Lugano arose to a completely white city surrounded by snowy mountains. Even Lugano’s notorious palm trees were heavy with snow. The weather provided a perfect environment for productive studying and essay writing. The library, cafeteria, and other common spaces stayed open until the early hours of the morning to accommodate for a deadline-filled week. 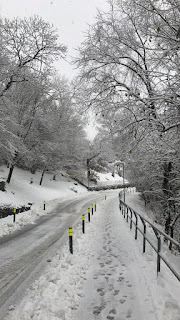 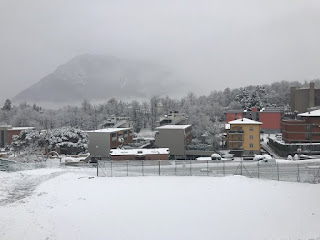 To recap, it has been a perfect end to an eventful semester, and I am glad you have tuned into this blog to read all about it! Check back in next semester for new posts about life here at Franklin University Switzerland. From Carnevale to Holi, there should be a lot of fun in store for this upcoming Spring semester.