By Unknown - April 10, 2017
In case you missed my last post, I've been collecting stories from students who participated in a variety of Spring Academic Travel courses. This is the second installment. Keep reading to hear about travels to India and Bhutan, France, Ireland, and even Bosnia and Croatia.

Did you know that students of Franklin's Masters of Science in International Management (Graduate Studies) Program also participate in Academic Travel? You can find that story at the end of this post. 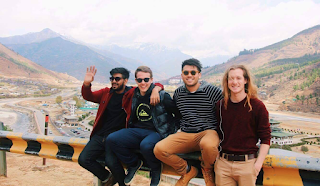 Briefly describe your Academic Travel course - what is the concept behind the course, what did you learn about, and where did you go for the travel component?
Our Academic Travel focused on economic development through the lens of sustainable practices and growth models, in conjunction with studies on the impact of rapid urbanization. We studied the UN definition of sustainable development and what measures they see fit to achieve it, various economic perspectives on sustainable development (both mainstream and non-mainstream economic viewpoints), the ecology and feasibility behind sustainable practices, and also focused on practices used in Darjeeling, India and Bhutan (the places visited on travel). We primarily studied sustainable agriculture practices, the role of culture on sustainability, and the impact of rapid urbanization while on travel.

What surprised you during Academic Travel?
I was absolutely taken aback by all of the natural beauty and diversity of plant and animal life we experience on travel. Hand in hand with that is the juxtaposition of this beauty with the unfortunate waste management problem that has resulted in quite of bit of waste just sitting on the side of the road, especially in Darjeeling. Darjeeling is referred to as a biodiversity hotspot, making it truly incredible to study amongst such a vast array of trees, plants, and animals. Unfortunately, as rapid urbanization has its consequences, especially with a town situated at 2100m with only one road, the waste accumulation seemed unavoidable. This was quite surprising to see, especially as people burned their trash, as I had never been in a place so lush yet so in conflict with the problems of urbanization. Bhutan was equally as beautiful, but did not face the same trash problem as Darjeeling.

What was your most memorable experience during Academic Travel?
There are a few. Sitting inside of one of the largest Buddha statues in the world and listening to monks recite their mantras. Flying on the same flight as the King of Bhutan. Trying archery on the banks of the Paro Chhu river. Visting a small village in Darjeeling for a day to study their agriculture practices. Pretty much all of the meals (including candle lit dinners in Darjeeling). Having high tea each afternoon. Being able visit tea gardens, then taste some of the highest rated/demanded teas in the world. Conversation with classmates. It is impossible to choose…

Is there a course project? If so, what is it and how is it supplemented by the travel component?
There is a course project. We will do a group presentation, on Earth Day, regarding sustainable economic development, focusing on an aspect of development we saw first hand on travel.

What was your favorite learning moment during Academic Travel?
My favorite learning moment on travel took place on the day trip to the 40-person village in a remote part of Darjeeling. We had to drive for some time but we were greeted members of the community and an NGO working in the village to gain insight on the village practices. We walked/hiked for a few hours throughout the village landscape learning about their intercropping methods, what crops they plant and how they plant them, what new techniques are being developed, and how they are motivating young people to continue with agriculture. It is known as a biodiversity hotspot and so having local villagers explain the lush surroundings as well as their farming practices was something truly spectacular. 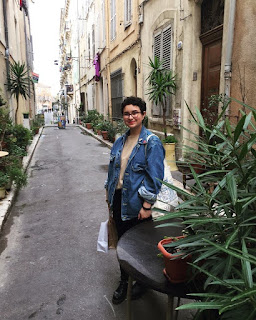 Briefly describe your Academic Travel course - what is the concept behind the course, what did you learn about, and where did you go for the travel component?
This travel focused on creative writing with Paris as a protagonist (hence the title). We studied the history of the city and examined the works of people who used Paris as the inspiration of their work. For the actual travel, we spent ten days in the 11th Arrondissement of Paris.

What surprised you during Academic Travel?
I went to an open mic hosted by Franklin alum Rachael Radich '16. I ended up going alone, but it was honestly one of the most enjoyable things I’ve ever done. I read, socialized, heard many amazing pieces, and made a lot of spectacular friends. It was the first time I’ve been to Paris and felt what it was like to actually live and belong there.

Is there a course project? If so, what is it and how is it supplemented by the travel component?
We are required to write two short stories over the course of the semester. During travel, we had a set of prompts, which were meant help us begin brainstorming for our short stories. We had six writing workshops to share our work and get feedback from peers.

What was your favorite learning moment during Academic Travel?
Our last two tours focused on the lives of different members of the “Lost Generation.” We followed in the footsteps of Ernest Hemingway, Gertrude Stein, Pablo Picasso, Salvador Dali, and Man Ray to name a few, looking at their old apartments and cafés they frequented. It was surreal to visit the places that inspired so many prolific 20th century thinkers. 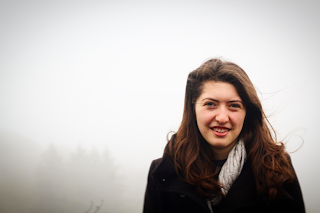 Briefly describe your Academic Travel course - what is the concept behind the course, what did you learn about, and where did you go for the travel component?
We travelled to Ireland to study the major points and figures in Irish history, mainly from the 17th century forward, and the effect these events had on building the culture of Ireland today. We studied the development of the Irish national identity, and the struggles and points of union between Ireland and Great Britain, and Northern Ireland and the Republic of Ireland. Main events which we studied included the Irish Rebellion of 1798, the Act of Union, the Great Famine, the Irish War of Independence, and the Irish Civil War.

What surprised you during Academic Travel?
History is far from my strongest subject, and I often find myself lost when studying multiple historical periods. Therefore, I was expecting to have to work much harder to remember the history we had learned in class and to put it in context on travel. However, I felt that Academic Travel helped to make the academic nature of history more approachable and easier to absorb and contextualize.

What was your most memorable experience during Academic Travel?
The most memorable experience on Academic Travel, for me, was the last day of travel, when I was able to attend a lecture from the Belfast Festival of Ideas and Politics. I was completely out of my depth, as the presenters began asking all of us attendees what we thought the future of Belfast would be. After the talk, however, I was able to join two of the presenters and three members of the municipal government at the pub, and we sat and discussed community development. It was a really good opportunity to learn about the aspects of the community I was interested in, from the people who lived and worked there.

What was your favorite learning moment during Academic Travel?
My favorite learning moment of travel was the tour we had of the Glasnevin Cemetery. On its own, the cemetery was an incredible, massive cultural site. To top it off, we were led around the graveyard by our guide: a sort of morbidly cheerful young man with a very large scarf, dancing around the graves as he told us the stories of their occupants. It felt almost like if Tim Burton had written a history book with a dozen terrible jokes hidden inside, which made the tour extremely entertaining and brought the historical figures we had learned about to life, if somewhat ironically.

And last, but not least, here's a special Academic Travel story brought to us by a student enrolled in the Franklin Graduate Studies Master of International Management program!

What is the goal behind your course?
The goal behind the course is to engage within the ecosystem of Global Entrepreneurship (MGT 560) in the Balkans: namely meet with all of the stakeholders, such as public sector, private sector, hubs, NGOs, business owners, and students.

What did you learn?
I learned that the public structure is weak in the spirit of SocEnt but that forward-thinking people are being innovative in the private sector by implementing a not-for-profit structure in order to be a successful social business.

Is there a course project? If so, what is it and how is it supplemented by the travel component?
There is a course project in a parallel course called UN Global Compact (MGT 575) which works with the World Bank on an active study to evaluate the feasibility of installing a laser park (or a sustainable business hub similar to Silicon Valley) in Romania. Otherwise, we participated in a social challenge at the Impact Hub on our last day which counted for final grading of the Academic Travel. Mixed Croatian and Franklin student groups used hashtags to present a new SocEnt idea that could potentially help with youth unemployment in the Balkans.

What was your favorite learning moment during Academic Travel?
My favorite moment for learning was listening to the director of the IRMO (Croatian Institute for Development and International Relations), a Bosnian woman, speaking on the parallels within the Balkans in terms of socio-political processes. It really provided a comparative analysis of what we had experienced by observation and what we would encounter in the second part of travel meetings.

Has your travel affected change?
I think this travel has affected change in our cohort both as we are individuals and also in our group dynamics. We have all become more informed in terms of our own research interests, and also have reformed small groups in terms of how we prefer to experience a new culture.

Anything else you would like to mention?
I did not imagine that the alumni we met in Zagreb would offer to treat us to the dinner that we invited them to. It was fantastic to see former Franklin students abroad doing well, both personally and professionally.

Tremendous thanks to everyone who helped make these posts happen! Your time and effort are truly appreciated.

If you have any questions about this post, Franklin's Academic Travel program, or anything else at all, please let me know in the comments! I look forward to hearing from you.


Arrivederci and till next time,